What am I on about?

It’s the difference between complexity and complicated and how you react to each.  It’s how chefs, distillers and vintners make use of time as an ingredient to add that depth of flavor or complexity.  It is what you respond to in a city, the places you have loved and all of the spaces that have left you with a sense of disease and a reticence to return.

What is it? The secret is the ingredient of complexity or people + time + place to interact and oil paint is made to submit itself to the catalyst of time.  To harness this ingredient in the way that the chef and the vintner does and to master it as I do colour and brushstroke, is to open the next door. The question is: what is the vehicle for time in oil painting?  The chef makes use of slow cooking, multi-level process’ and sometimes just allowing the elements to act.  The vintner uses casks, the harvest seasons and bottle closing methods, so what is the vehicle in painting?

I used the January painting 2016 to start looking at the answer and it seemed obvious to use the Vancouver Viaducts as my subject as they seem to be urban manifestations of complexity.

So why the Viaducts?

Good question and one that I have been asking myself since I chose to use them as the subject.  It seemed to be a ‘no-brainer’ at the time but the more I look at them the more I am not sure what to do.  After all, this is not meant to be a insightful and concise history on the structures nor a thoughtful, educated critique of the plans that have unfolded for this area of the city.  At the time of choosing the Viaducts, they presented a meeting point for discourse as their presence and also the lack of presence of the rest of the Freeway system to which they were meant to be attached, represent varied political, racial, economical and urban dreams. They have been bullies, murderers, caretakers, capitalists, communists, friends, enemies and orphans.   It is hard to keep in mind that this is about painting as it is easy to run with the prevailing temperature of a moment and think only about the story but the main question for me is where is the intersection with painting? I have chosen a naturally complex urban structure but where and what are the paintings? This is the question that lead me to understand that this collection while being the Death Mask of the Viaducts (they are intended to reflect the physical spaces which the Viaducts occupy and define), intersect with painting through the idea of complexity.  All that stands now is to understand how to use time as a pigment to introduce a complexity similar to that of the Viaducts, into the paintings. 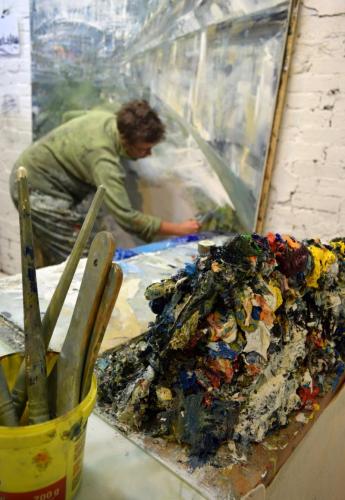 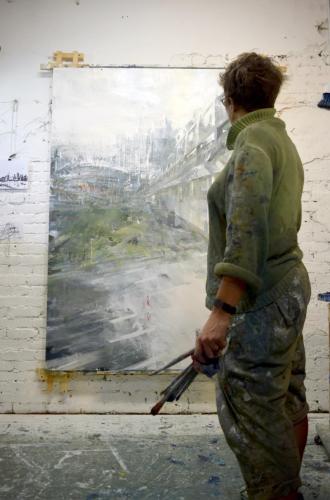 Googling the idea of complexity was not the best place to start directing my own thoughts on the difference between complex and complicated. My perspective did shift as I realized that the idea of complexity spills over into many fields and at the risk of descending down a rabbit hole I have restricted my thoughts for now to the area of what I guess could be included under the banner of urban sociology?

Complexity is different to and far more engaging than complicated and it is simplistically defined as a system made up of many parts, all of which have independent relationships to each other. Remove one part or break one part and it is virtually impossible to remedy because it is hard to understand how the parts interact with and influence each other.  A complicated system is made up of many parts but they are not interlinked and can be thought of more in terms of linear relationships.  Break one part and it is easy to understand and repair.  In thinking about what I find invigorating in the city and culture, it is the complex that stimulates the imagination because it generates endless wondering. Complicated is fun but lacks the stimulation and intrigue.  I am convinced that a sophisticated painting is a complex one possessing a depth of flavour and intrigue.

The second painting in progress

Complexity is instilled in painting when we understand destination and build in flexibility by taking the time to arrive thoughtfully. Not looking for the quickest route, not accepting the first solution but by examining the already existing layers and seeing what can be preserved and developed and what can be removed or reworked so that the final work is rich, multi layered and complex. Oil Painting is a perfect vehicle for complexity as it allows you to develop a conversation with a very visceral medium which allows for organic growth of the work.

Creating an active ingredient from time

Meandering along the idea of the iconic-soon-to-be-no-more-Vancouver-Viaducts, the areas of the urbanscape that invigorate and those that repulse and the realization that time is an important element lead me to thinking about time not just a passive passage but an active ingredient.  The question then becomes one of how to activate it so that it works on something in a non destructive way and the answer seems to be relationship.  Not the gooey community relationship stuff that can be bought at the corner kitsch store but the deviant, misaligned, misinformed and always narcissistic connections that we create between objects and people based on our often uncritical thoughts. So if time can be activated to be a positive ingredient which can introduce complexity through the mental strings that we attach to things, ideas and events – how can it be harnessed for use in painting?  I return to the urban and the Viaducts for answers.  It appears that the key is to introduce some guidance for use or the introduction of a new idea and then allowing the other to use their already existing relationships to create new ones with the area, idea or object and to surrender your control to this new relationship so that it has the ability to evolve in as many unique ways as there are people who interact with the original object or the use/interpretation that the relationships of others introduced.  How much more invigorating can this be in painting as it literally means introducing and harnessing time by applying your marks in such a way that they activate the viewer by signalling that this is not a passive act, they are not consumers but co-creators and when they engage with the painting create a permissive space to do so and then surrender control of the completion of the painting to them.